The Evolution of the Cosmetic Laser 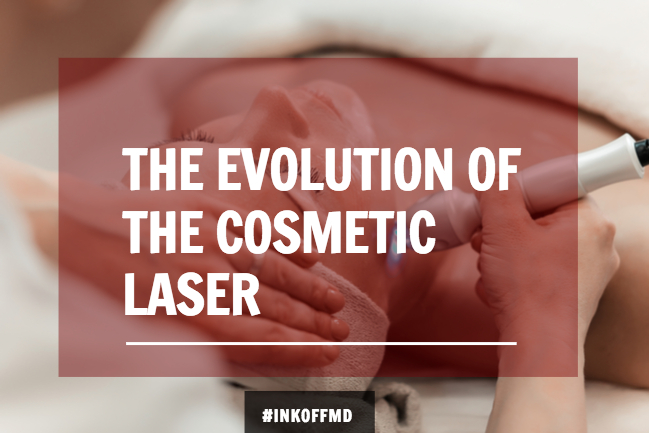 Cosmetic lasers have come a long way from the pioneering ones first used to remove wrinkles. In the early days, laser treatments were a luxury for only a select few. Today, laser procedures are extremely popular and technology has advanced light beams ahead (pun intended). Today's specialized instruments can treat specific issues. They can help you get rid of perceived flaws such as wrinkles, stretch marks, acne scars, and unwanted hair. They can even erase something that nature did not give you...the inked designs you received from a tattoo studio.

Thirty years ago laser usage for purely cosmetic reasons was only a gleam in a few doctors' eyes. At that time, the process was not for the faint of heart. Only people willing to deal with an extended downtime and the possibility of complications underwent treatment. Laser equipment was not a precision instrument in those days and the laser burns could be extensive and take weeks to heal.

Annoyed by wrinkles you would like smoothed out? A couple of sessions with an experienced laser technician may be the answer. Unlike their predecessors, CO2 fractional lasers resurface the skin with minimal downtime. Initially, after having the treatment, a person may feel like hiding beneath a hat and sporting large sunglasses, but in a matter of days he or she will be out and about. The process of rejuvenating the skin is fairly simply explained. Basically, in order to smooth out fine lines new collagen needs to be produced. The laser burns microscopic holes in the skin supercharging collagen production.

Have some hair you want permanently removed? Again, you may wish to consider getting laser treatments. A laser is a remarkable tool for getting rid of unwanted hair permanently. The procedure for removing hair is precise and quick. It can treat small areas in a matter of seconds. It may take a few sessions to get rid of that unwanted hair above your lip, but just imagine how freeing it would be to throw away the bleaching creams and wax strips.

Have you tried everything but you can’t get rid of those stubborn acne scars? Lasers to the rescue again. The same principle is at work here as in the rejuvenating process. The beam of light encourages production of collagen to fill in the pitted scar. An experienced technician can lessen the appearance of stretch marks as well.

Bored of that ink on your arm? The PicoSure laser is the ultimate equipment for removing it. You might say PicoSure tops the evolutionary chain of tattoo removal lasers. It can get rid of tattoos with multiple colors. It is advanced enough to erase those hard to remove colors such as greens and blues. If you’ve been stuck with the ghost of an old tattoo because the last treatment you received was not completely successful, then come to our office in Hawaii for a consultation. We will let you know if PicoSure can help erase the last traces of that stubborn tattoo. And unlike the lasers of yore or even those on the market just a few short years ago, the PicoSure can perform its magic in fewer sessions and with a shortened recovery time.