Tattoos & Military Regulations: Do You Need to Remove That Tattoo? 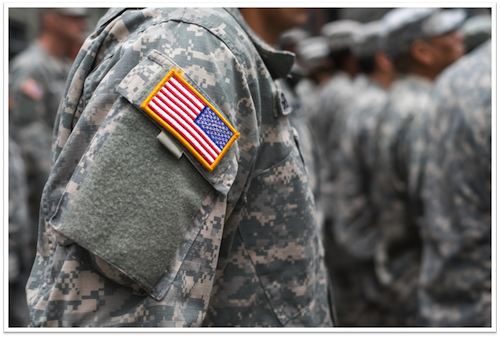 If joining the military has been your life’s ambition, you might want to consider staying away from tattoo parlors, or at the very least, limiting the sort of tattoos you will be getting and their placement.

If this advice comes too late, you should have any controversial tattoo or any tattoo on your neck, head or hands removed before approaching a recruiting office.

A Right of Passage
Getting a tattoo is a rite-of-passage for many young people turning eighteen. And plenty of individuals sport tattoos given to them by friends while they were still minors. Because the cohesion of a military unit is of utmost importance, all branches of the military have policies against divisive tattoos. Gang affiliations or extremist group symbols are not allowed.

Anything indecent with a racist or sexist intent are also against policy.The navy has a rich history of tattoos. It’s a rare sailor who does not celebrate his travels with some kind of body art. Vintage sailor tattoos of anchors, ships, swallows, hula and pin-up girls, and hearts with daggers are extremely popular, even with people who have never set foot on the deck of a military ship. Times change and what was once overlooked by superiors, may very well no longer be allowed.

For instance, a sexually explicit drawing of a woman would be against regulation.

And the new policies won’t allow any tattoos which peek above the collar of a crew neck t-shirt or that can be seen through the white uniform. A sailor is allowed to have a tattoo on the arm, which would be visible when wearing the short sleeve uniform, but the tattoo cannot be bigger than a hand.

In some branches of the service, there is a policy where personnel who had the tattoos before the regulations went into effect are “grandfathered”, basically allowed to keep it. Though these military personnel will be able to keep their tattoos, they may very well find their futures more limited than those without these types of tattoo. For instance, in the marines, an enlisted man who has a tattoo sleeve will no longer be considered for duties such as recruiting.

Tattoos which promote violence, lawlessness, and/or obscenity are just a few of the marks that will keep you out of the Coast Guard. You will not be considered qualified to join the Coast Guard if your tattoos do not meet regulations.

The Coast Guard may reconsider an applicant who has the tattoo removed or altered to meet regulations. And for current personnel certain tattoos like those on the head, neck or extending past the wrist bone will not be “grandfathered”.

For recruiters, good personal grooming and a professional appearance are serious considerations when reviewing potential applicants. Why chance being turned away by the recruiter?

If you wish to join up you should consider getting rid of any tattoos which may disqualify you for service. Laser tattoo removal is probably your best bet. Our laser tattoo removal center in Hawaii can help you get rid of those problematic tattoos.