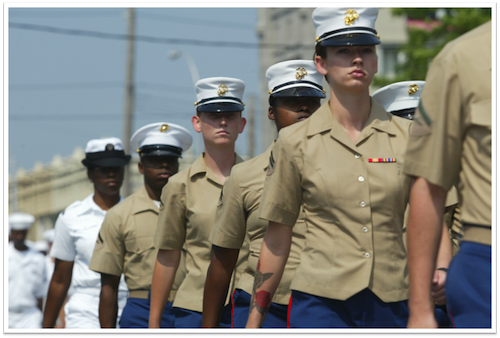 So you’ve decided to get a job that makes your adrenaline rush and requires ultimate bravery- the military. Could a tattoo stop that dream from happening? Most branches, especially the Marine Corps, have severe rules restricting body art. Marines aren’t allowed any tattoos that could compromise the integrity of the division.

So, if the tattoo incorporates nudity, vulgarity, or has references to illegal substances you should highly consider getting them removed. Additionally, half and quarter length sleeves or any band thicker than 2 inches is prohibited. Officers are held to a higher standard; they can’t have more than 4 tattoos showing when they are wearing shorts with a T-shirt. But women actually have stricter policies than officers even do.


The Rules For Women


Recently the Huffington Post released a story about Kate Pimental who wanted to join the military. She was in optimal mental and physical health; however, when she was 18 she got a tattoo on her chest. If she were a man this would slide because they wear crewneck shirts. Women wear a v-neck, which would reveal her tattoo. There could be hope for Kate and other women wanting to enlist in the marines with a revised tattoo policy in the works. 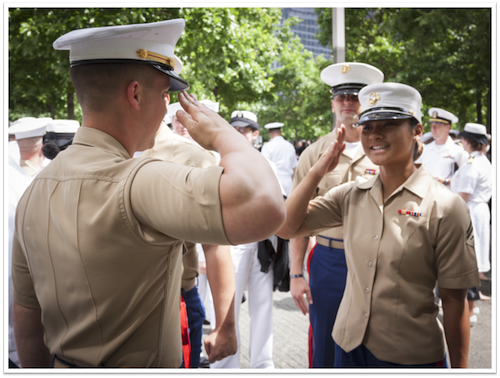 The tattoo policy hasn’t been updated since 2010, but there’s a revision coming soon. Some branches like the Navy and Army have become more tolerant on their tattoo restrictions. Commandant General Robert Neller told a source the ban on tattoo sleeves will continue. However, The Marine Corps Times stated they will touch on size, placement, and the career paths of people who have tattoos.

Neller explains the revisions will aid recruits like Pimental. He says, “There will be a little flex on what is an acceptable tattoo. My goal is, in less than thirty days, this things will be out, and it will include specific rules for Marines who want to do special duty assignments or become warrant or commissioned officers.”

As for Pimental, she has continued to train with other recruits, but is unsure if the new regulations will allow her to serve. She is set on the Marines, so will have to get laser tattoo removal if she doesn’t have another option.

InkOff.MD offers the most advanced techniques for tattoo removals with fascinating results. www.inkoffhawaii.com