Ink in the Workplace: Tackling the Tattoo Taboo 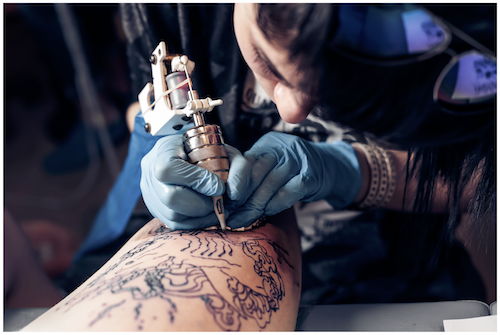 Ink was once a mark of rebellion. If you spotted someone with permanent patterns scrawled on the surface of their skin, it was likely this person stood for something outside the realms of social normality.

Gangs could be identified by their markings. Hysterical protestors wore ink to show commitment to a cause. Long-serving felons were distinguishable for the designs they acquired in prison.

Tattoos can still represent revolt and resistance to this day, but they have also begun to move inside the circle of modern social acceptance.

Inked skin is no longer an exclusive indicator of off-center opinions and lifestyles, but rather an artistic reflection of individuality and certain values.

Tattoos can say things about a person that words never could. The main issue, however, is that the corporate world is still hesitant to hear them. Whilst society as a whole has become increasingly more open-minded about tattoos, there remains a high degree of controversy surrounding inked skin in the workplace.

Many are attempting to tackle the big taboo around tattoos in the employment sector. But will tattoos ever be considered completely acceptable in the working environment? Should they be?

As the debate rumbles on, we take a closer look at the current status of tattoos in the workplace and attitudes towards them.

For many, tattoos are no longer purely associated with crime, violence, and insurgency like they were once upon a time. Opinions about inked skin still vary, but tattoos are not considered the huge social taboo that they used to be.

The good news for tattoo wearers is that ink is being slowly accepted by a growing number of SME’s, with practical approaches starting to be enforced by smaller businesses. Some of these companies have no problems whatsoever with tattoos, whereas others kindly ask employees to cover the inked area with long-sleeved shirts and collars if they are attending important meetings or interacting with clients.

However, an interesting trend is apparent when it comes to tattooed people and bigger businesses. Evidence suggests the further up the employment ladder you travel, the less tolerance you will find towards tattoos.The more money and “professionalism” a position involves, the less likely that tattooed skin will be permitted.

Despite the shifting stereotypes amid the lower reaches of society and smaller businesses, the stigma towards tattoos in the workplace remains intact in corporate spaces.

Tattoo-related health issues are much rarer than many people think. Nowadays, many tattoo parlors are as bright, clean, fresh and crisp-looking as a health care center.

If studios continue to commit to a bright, professional image, show sublime health & safety standards, and offer a clean waiting area for customers, we can expect to see increased acceptance of tattoos in the workplace. The cleaner the image – the greater the chance of professional environments becoming more accommodating.

The reputation of tattoos has also suffered due to the fact that, until recently, they were considered impossible to eradicate. It’s true that tattoo removal is still challenging and may leave a mark in some cases, but thanks to the evolution of science, it is now a real possibility. Follow-up procedures and aftercare can also be performed to minimize scarring, and as laser treatment becomes more affordable via payment plans, the intimidating "permanency” that formerly surrounded tattoos is slowly subsiding.


There remains a growing sense of awareness around health and safety with tattoos, suggesting that studios are acutely aware of societal demands for excellent hygiene and high standards. This will surely help enhance the reputation of tattoos in the long run.

Tattoo parlors are creative hubs just like many marketing or business agencies.

As innovation and creativity become increasingly attractive in the digital age (where so many tasks are performed on auto-pilot), companies are beginning to respect the work of tattoo studios and appreciate why people might want to get their skin inked with these types of patterns.

For a long time, companies were happy to work alongside tobacco companies. Working with tattoo studios, on the other hand, was seen as widely unprofessional. But the balance is shifting. Businesses now go out of their way to avoid any kind of association with tobacco or other “unhealthy” products but are eager to work with tattoo studios given how these parlors promote art and creativity.

As businesses begin to understand the values of tattoo studios, more companies will begin to embrace tattoos in the workplace overall. The shift is happening, albeit at a very steady rate.

An influential factor in tolerance levels towards tattoos is whether a particular pattern has personal meaning.

A visible tattoo is often a talking point, and if the owner of the ink can explain the reasoning and rationale behind getting the tattoo, then someone who was initially suspect beforehand immediately begins to soften.

This goes for employers, too. Many recruiters will be able to sympathize with a prospective staff member sporting a tattoo of a loved one’s name. Tattoos with personal significance have a greater chance of being accepted in the workplace than those which appear as “noisy” patterns, and many employers will factor this into their decision during the recruitment process.

Unsurprisingly, employers often deem facial tattoos to be inappropriate. Whilst society is beginning to accept inked skin, many people remain far less comfortable with facial tats. Given how the business world is two steps behind society in condoning body prints, it is safe to say that facial tattoos aren’t likely to be accepted in work environments any time soon. In the case of big name corporations, they may never be embraced.

There is some way to go for ink to be wholly accepted, but tattoo enthusiasts can take some heart from the direction in which things are heading.